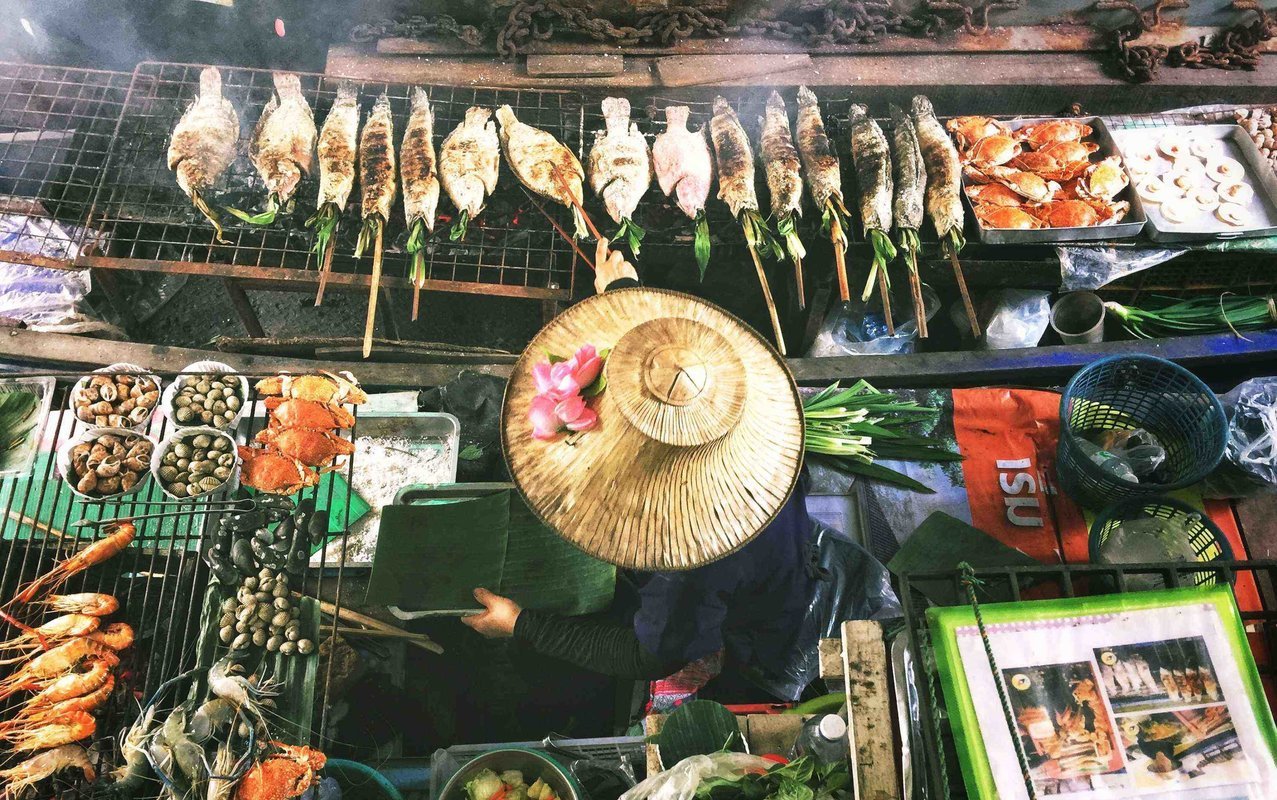 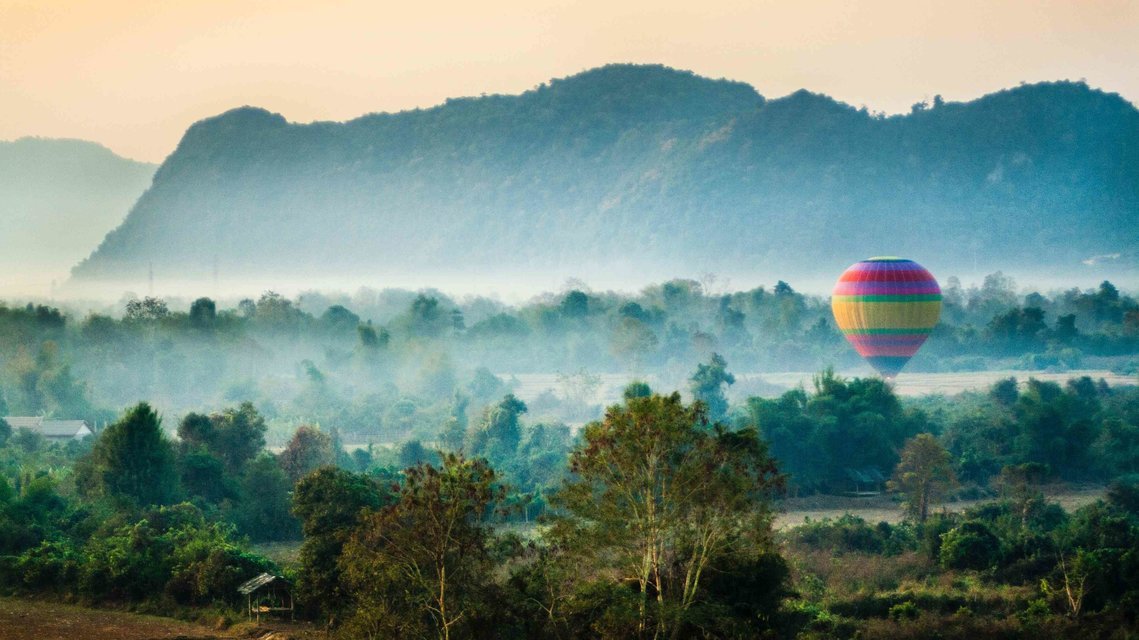 The land of the ascending dragon of Vietnam and million elephants of Laos calls out to the adventurer in you to experience this memorable 15-day trip across the 2 countries hosting several well-known cities and natural wonders. Right from the mornings spent experiencing the surreal rituals of monks at Luang Prabang to saving your breath while slithering through the narrow cavities of Cu Chi Tunnels in Saigon and finding the simple joy of sharing a traditional Vietnamese meal with locals in Hanoi, these two weeks tailored by our experienced travellers and guides are bound to leave you astonished, enlightened and craving for more by the end of the journey. Come and be a part of this takeaway of a trove of lasting memories, from two of Southeast Asia’s most pleasant countries. Notes: Museums remain shut twice a week. Monday and Friday The Mausoleum in Hanoi are open throughout the year apart from September and October Hiring cycles and two wheelers are subject to government permits and availability of vehicles 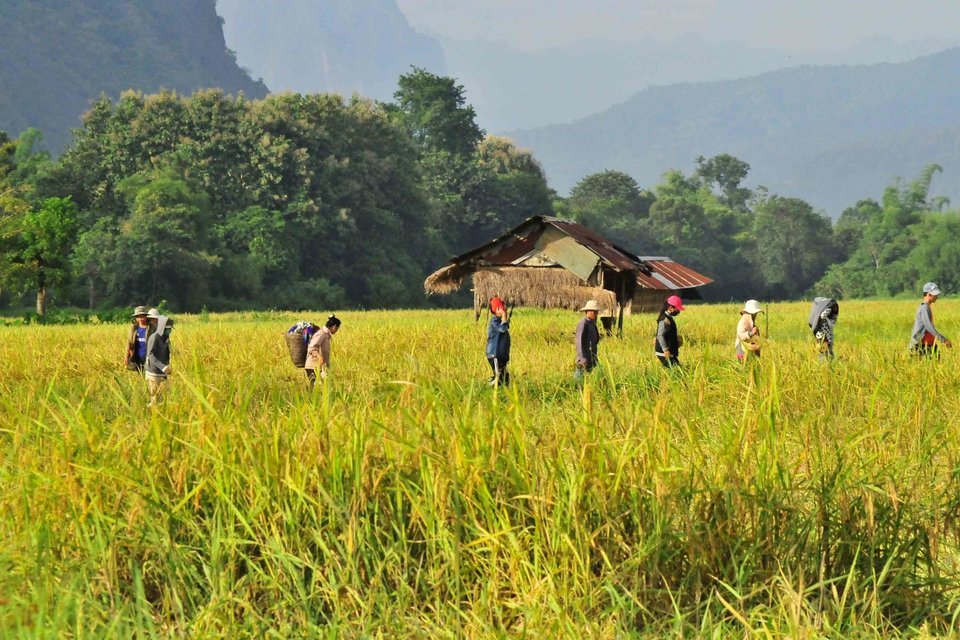 19 days and nights spent extensively exploring the natural, historical and cultural evidences of the Indo-China plateau, beginning in Phnom Penh, a city once known as the Pearl of Asia, currently finding its place back into being a moderately busy capital, and heading on to Angkor Wat in Siem Reap, which many consider as one of the seven wonders of the world and the temple which is believed to be the world’s largest religious building. Moving on to the hustle and bustle of Saigon, to experiencing up close more culturally relevant towns of Hue for its many attractions featuring the majestic tomb of Minh Mang, renowned for its architecture and forest setting. Along the way, we explore the city of Hoi An, that boasts of its historical and cultural uniqueness and individuality. Living life like a local and overlooking the karst cliffs in the vanishing grey mists of the Halong Bay in Hanoi before moving on to the capital of Laos, Vientiane- home of the massive gilded stupa, Pha That Luang, a national symbol of Laos. Finally, finishing up the last leg of the journey by stopping over in Luang Prabang, the quaint and laidback town with its waterfalls, scaling peaks and the milky-brown waters of the surreal Mekong River. Notes: Museums remain shut twice a week, every Monday and Friday The Mausoleum in Hanoi are open throughout the year apart from September and October Hiring cycles and two wheelers are subject to government permits and availability of vehicles 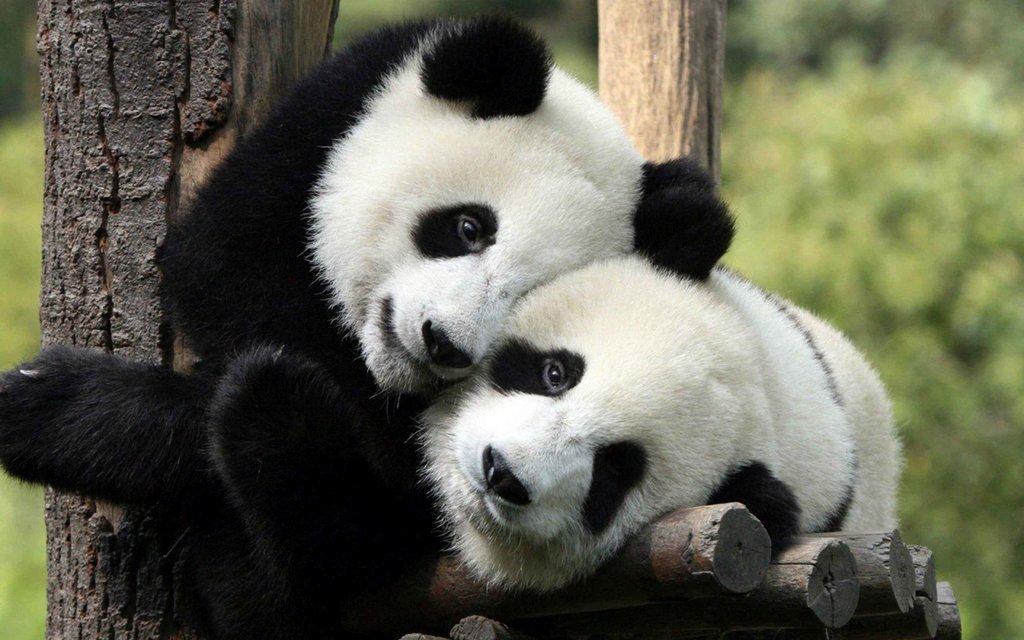 Are you ready for A Hong Kong Adventure? Whether you’re an intrepid solo traveller, or making a quick getaway with your family or a few friends, ProVacation has the perfect mix of action and wonder for you. You will see a side of dazzling Hong Kong that is not the most common tourist experience. Thrill your inner child (and your actual children, if you have any) with trips to Hong Kong Disneyland and Ocean Park. Meet your favourite fictional characters at Disneyland and make some new friends among the marine creatures of Ocean Park. Hold on to your stomach through exciting theme park rides. If you think Disney’s characters are cute, you haven’t seen anything yet. Hang out with the pandas in Guangzhou and fall in love with these adorable bears. Of course, you’ll still have plenty of opportunities to explore the usual sites and go shopping, but we’ve spiced things up with a scavenger hunt through the major neighbourhoods of Hong Kong. Take a break from the bustling urban areas by going on a hike up misty Tai Mo Shan. And on your final evening, take in the sights and tastes of glittering Macau. Adventure awaits you in Hong Kong!

Pro Vacation brings you a one-of-a-kind Cambodian sojourn with a 9-day journey across Cambodian country roads. On this tour, we seek out the exotic and the unexplored. Try cycling across the rural back roads of Stung Treng and passing bustling bazaars and serene temples on your way. Sail along the Mekong River on an excursion to spot the elusive Irrawaddy dolphin near Kampi. Visit a mulberry farm to see how local women from vulnerable communities are trained in sericulture and silk weaving. For the adventurous epicurean, there’s a dish of deep fried spider to munch on! Our tour takes us to the island of Kep. Explore this charming colonial-style town once favoured by Cambodia’s French elite and take a trip to the curiously named Rabbit Island. History lurks in every corner of Cambodia and we stumble across several intriguing relics on our tour including the 7th century Prasat Preah Srey and the 12th century Wat Nakhor Pagoda. This is a fully immersive trip into authentic Cambodian rural life. If you love adventure and discovering new cultures this is the trip for you. 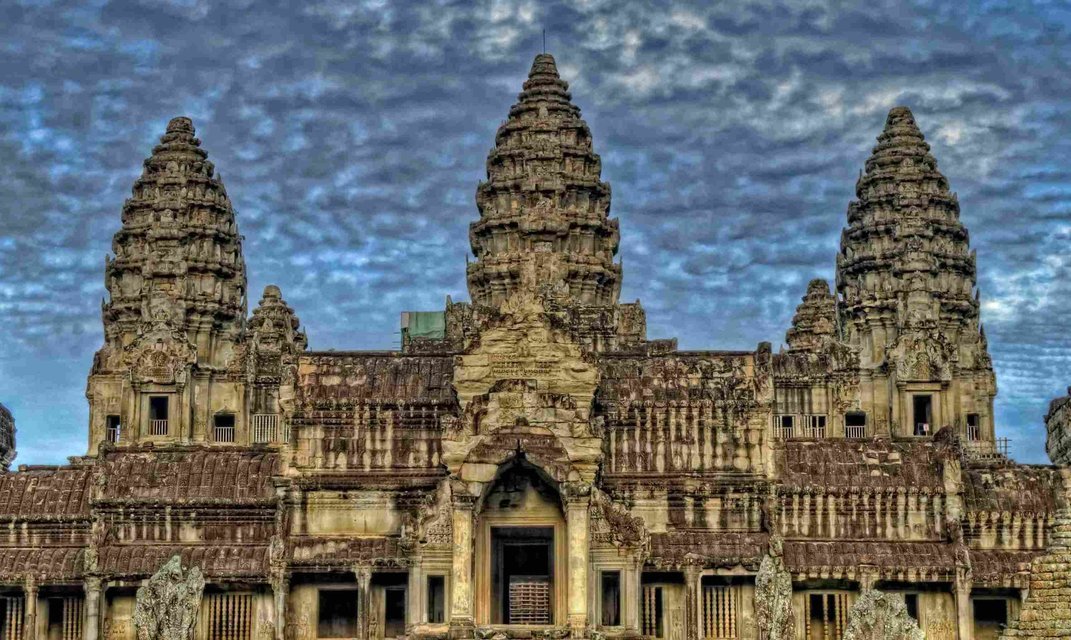 Our 10-day Cambodian Temple Trail takes you on a journey to explore some of the best known as well as remote temples of the country. Our tour begins in the ancient city of Siem Reap and we trace the trajectory of the Angkor kingdom and its architectural marvels in the old capital of Angkor Thom. The 12th century site is home to several Hindu and Buddhist temples some of which have stood the test of time, while others are now dilapidated relics of their former structures. Discover the fascinating legends behind these ancient edifices once used by kings. Visit the most iconic temple of Cambodia, Angkor Wat and be awed by the magnificence of Khmer architecture and craftsmanship. Our journey takes us through a jungle canopy to the hidden temple of Banteay Chhmar that remained abandoned for 800 years. History and legend lurk around every corner of Cambodia and we seek out some of these enigmas on our temple trail across the country. For those who have an affinity for Southeast Asian history, this tour is particularly interesting as it traces different periods of Khmer history and shows the fusion of Hinduism and Buddhism in local culture of the time.

The tour offers a lot more of the local lifestyle and interactions with tribal groups as we spend time at the longhouse. The wildlife and nature exploration is always a component when visiting Borneo. The tour will take you to the Bako National park and Semenggoh Nature Reserve. Visit the fruit markets and the pepper farms. Travel up to Batang Ai and relax in the idyllic Aiman Batang Ai Resort and Retreat. Take a morning ride in a traditional longboat and head upriver to meet the former headhunters of Borneo and later watch them sound their gongs and perform a war dance in full ceremonial regalia. Unwind in the lap of nature with endless walks in the woods nearby. Take an express boat ride to Sarikei division and explore the native market. Walk in the jungle and pass through farmlands to arrive at a jungle waterfall. Swim &amp; relax while native lunch is prepared for you. We now go for a Rainforest Kayaking expedition. Explore small pepper farms on the way to the start point. Hop into your kayak and follow a tributary before it joins the Sarawak Kiri river. Alight to explore a delightful Bidayuh village &amp; enjoy a native lunch. Continue kayaking, surrounded by lush vegetation and some stunning views. Enjoy a culinary evening tour back to Kuching where a Malaysian family will invite you into their home to show you how to make traditional local food. 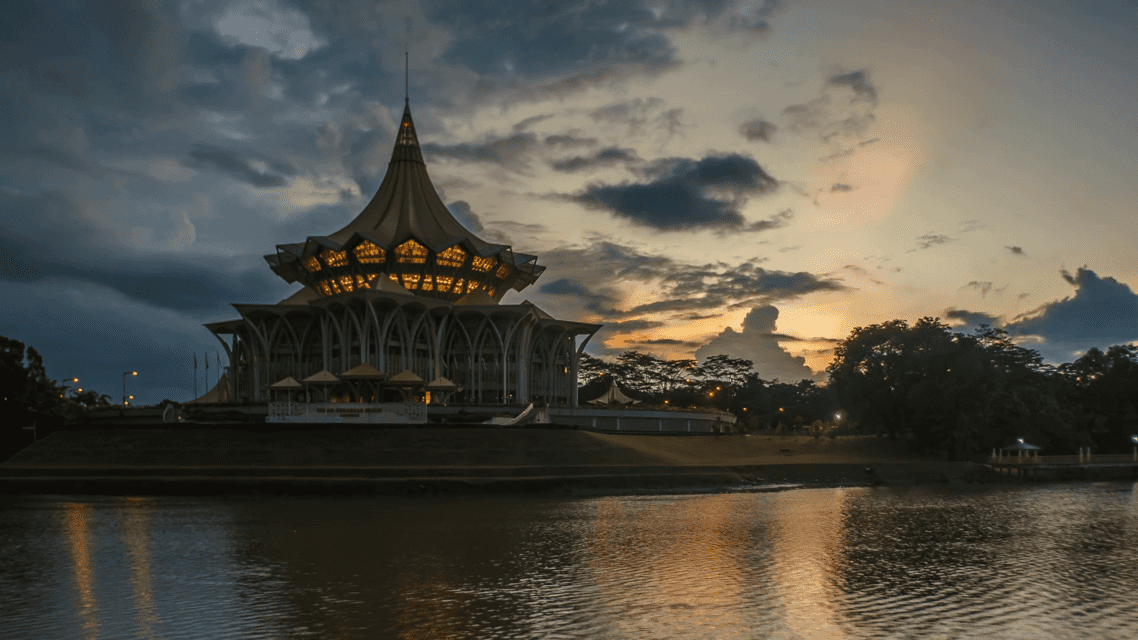 It is time to experience Malayan life up close. Starting from Kayaking on the tributaries and the Sarawak River to visiting small pepper farms and a Bidayuh Village, this is local life all the way. The Lush green vegetation is a welcome departure from the city hustle. Visit a local family and learn to cook Malay food, enjoy what you help create for dinner. Wildlife and natural beauty are never far when in Malaysia. Visit the Semenggok Nature Reserve where you will see semi-wild orangutans before traveling on a traditional longboat to meet Borneo’s natives &amp; spend a night in their longhouse. Mulu is a UNESCO world heritage site and the caves are just majestic. Visit Deer Cave and Lang Cave. The evening site of millions of bats flying out of the caves is stunning. We will then take a boat to Penan village before continuing to Wind Cave &amp; Clearwater Cave. The exploration continues at Kinabalu Park and Mountain Garden with its rich flora &amp; fauna. Finally, a boat ride to an island in the Tunku Abdul Rahman Marine Park to swim &amp; snorkel and relax in paradise. 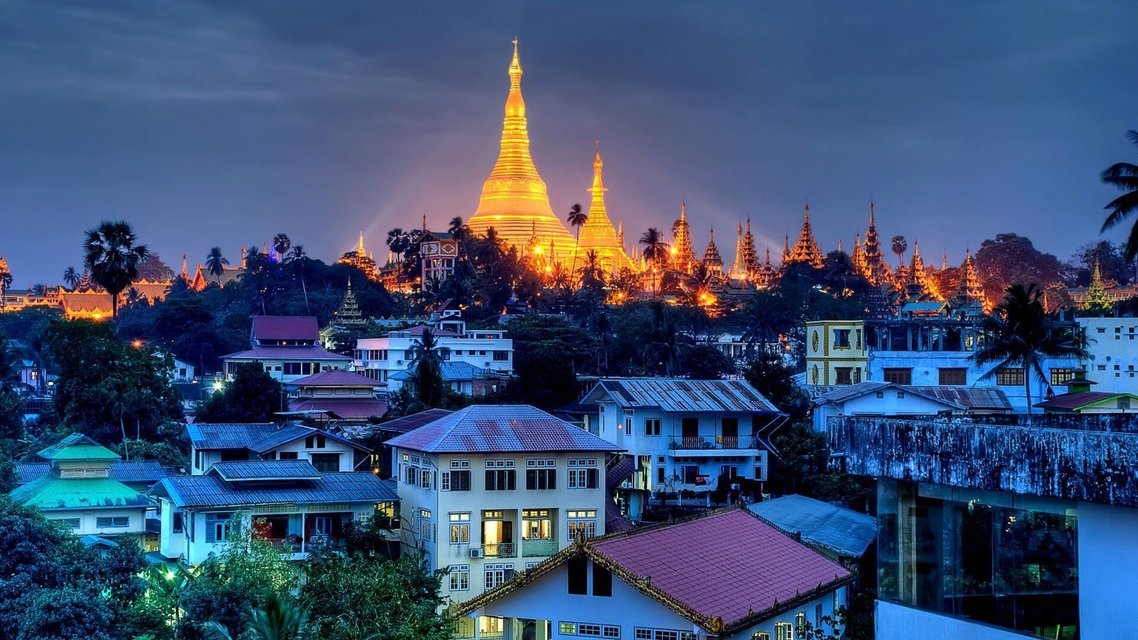 Our Myanmar soft adventure and cycling tour brings you an authentic taste of this beautiful country. In just over a week, you will see everything from spectacular pagodas and temples to authentic villages and small handicraft workshops, to virginal island beaches and myriad species of avian life. We bring you Myanmar in a nutshell by handpicking the most authentic experiences of this country. Our guide will show you a variety of birds - many species of which have migrated thousands of miles for warmer weather. You will also step back in time in Bago with visits to ancient temples and beautiful pagodas with majestic statues of Lord Buddha. You will also learn more about the ancient port cities of Myeik and Kawthaung. Enjoy underwater adventures with snorkelling at Myanmar’s stunning island locales where you can also relax and unwind at the beach. Our Myanmar soft adventure and cycling tour also gives you glimpse of the lesser known parts of Yangon city by taking you down tiny riverside lanes, an almost forgotten island and busy local markets. 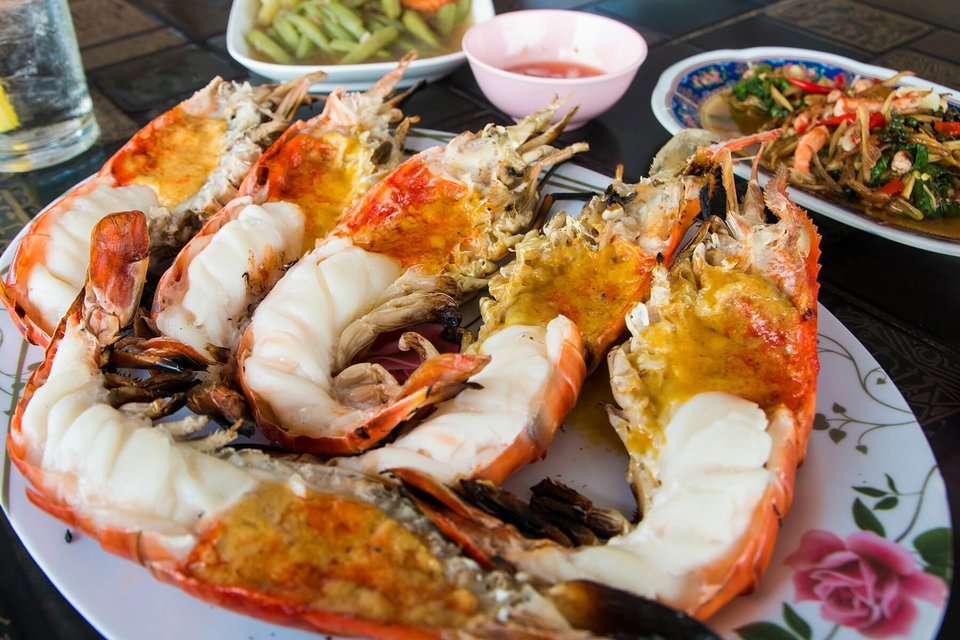 Thai food is one of the most popular cuisines around the world ​favoured for its delicate flavours and aromatic blend of spices and herbs. On this special Epicurean’s Delight Tour, we take you to the capital city of Bangkok for some unforgettable food adventures. From exploring the many vibrant markets in and around the city inspecting the fresh produce to getting a behind-the-scenes look inside the best restaurants of Bangkok, this is a hands-on experience of culinary life. On this tour you will get to taste at least 20 different dishes in different restaurants, street stalls and farms. Enjoy a master class at Bangkok’s famous Baipai Cookery School and learn the tricks and techniques of cooking and plating some authentic Thai recipes, sure to wow your friends and family back home. Feel like royalty as you enjoy an evening of traditional dance and music over an exquisite Thai dinner. This Epicurean’s Delight Tour is a fully immersive experience of Thai culture through its ancient culinary traditions. So join us as we take you on a delicious journey into the heart of Thailand. We hope you’re hungry!